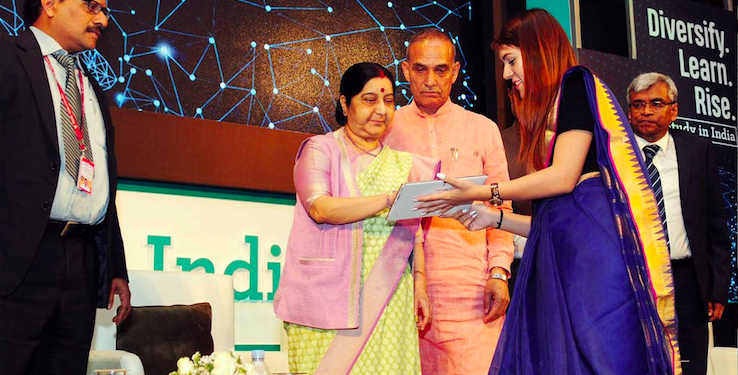 India to be top study destination in two years

The Indian government has promised fee waivers to foreign students choosing India as their study destination as part of a campaign that has a commitment to welcome 1 million inbound students.

Following the launch of the Study in India web portal on April 18, which will be a one stop solution for international students, the government has now proposed few waivers, funded by various institutions.

Satya Pal Singh, the Minister for State, confirmed that the “fee waivers to meritorious students” will be decided by the university concerned and could be: a 100% waiver of tuition fees (to the top 25% students); 50% for the next 25%; followed by 25% to the next 25% students.

Singh explained that “no additional funding has been allocated” by the government for the fee waiver program but the subsidies will be borne by the university/ institution offering admission and will be “based on cross-subsidisation or through its existing funding”.

The government hopes to extend this number to 100 before the beginning of the academic year.

It means that up to 75% of international students applying to Indian institutions could receive a graded fee waiver determined by their SAT scores.

While India is the second largest supplier of international students to global destinations, it has failed to create a niche as a student destination. The Study in India program hopes to change that.

The Human Resource Development minister, Prakash Javadekar, is spearheading the program and spoke at the Internationalisation at Home conference recently.

While he was not specific about a time frame, it’s an ambitious target considering that only 47,575 international students came to India in 2016-2017, according to official data. Technology and management degrees have been the most popular.

Top source countries for India include countries in the South Asian Association for Regional Cooperations (Nepal – 23.65%, Afghanistan – 9.3 %, Bhutan 4.8%) and Africa (Nigeria and Sudan together accounting for almost 9%) and Malaysia at 3.3%.

The Study in India program will see a massive expenditure on branding India as a lucrative study destination over next two years (approximately $23m allocated).

The first phase of the programme will see 30 countries targeted which will later expand to 60 more.

These include SAARC nations, ASEAN nations, Central Asia, Africa and the Middle East.

First published by “The Pie News“